Eduardo was sound on Europe

In the current Brexit context, good to see that Eduardo was a ‘Common Market’ man rather than a fan of the federal nightmare.  That’s not to say that he didn’t like Europe itself – after all, he spent a lot of time in Germany teaching and working.  But, as you see, like many others of us, he left Paris ‘with his tail between his legs.’  And, as a prophet of the Brexit global-trading philosophy, note that Eduardo was selling mostly into the U.S.  The cutting is from The Tatler, August 1962 – a publication which regularly reported on his work and exhibitions during the Sixties: 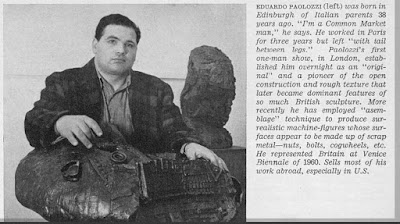