The final look at Moonstrips here is at the pattern-rich picture prints, six of them below: 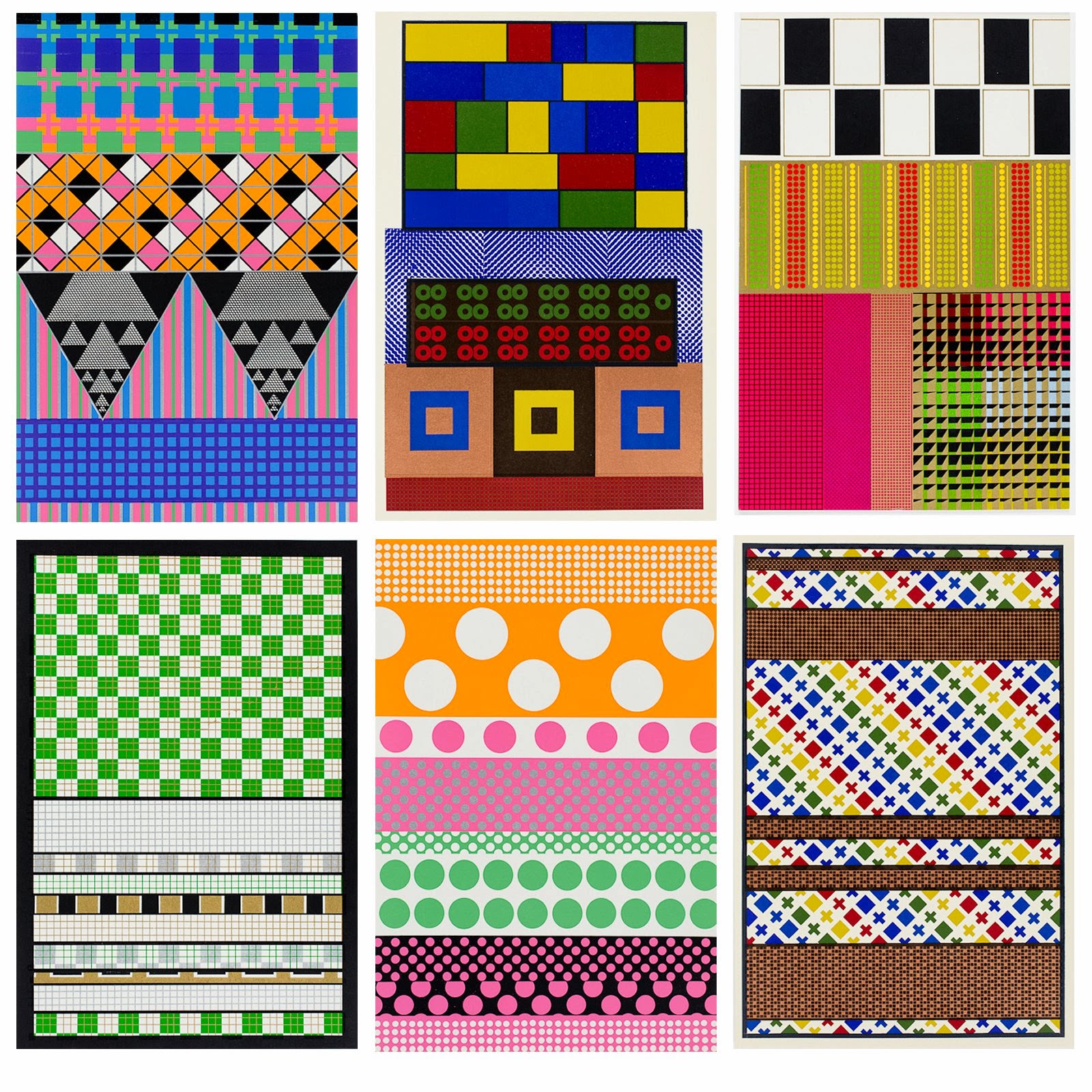 It would be difficult to overrate the value of pattern in artistic practice.  It enables the creation of visual harmonies, symmetry and rhythms.  These can be highly instrumental in manipulating the viewer’s mood, (usually towards calmness), as well as their visual experience.  And, where a pattern is interrupted/disturbed, a sense of unease can be evoked.


Pattern helps establish order and solidity – in traditional painting think for example of how Vermeer’s tiled floors underpin the 3D effect of his interiors.  In modern art, where there is no concern with perspective, pattern has often been used to ground and integrate disparate imagery within a single painting/print – this is a technique of Paolozzi’s.  His chequers and squares and stripes slosh about on a print like the stock of a soup in which the diverse chunks of pictures/words can be seen and appreciated as part of something which overall is more appealing than the individual ingredients.


Whilst the use of pattern for integrating purposes is so notable in prints such as A formula that can shatter into a million glass bullets in the Universal Electronic Vacuum suite: 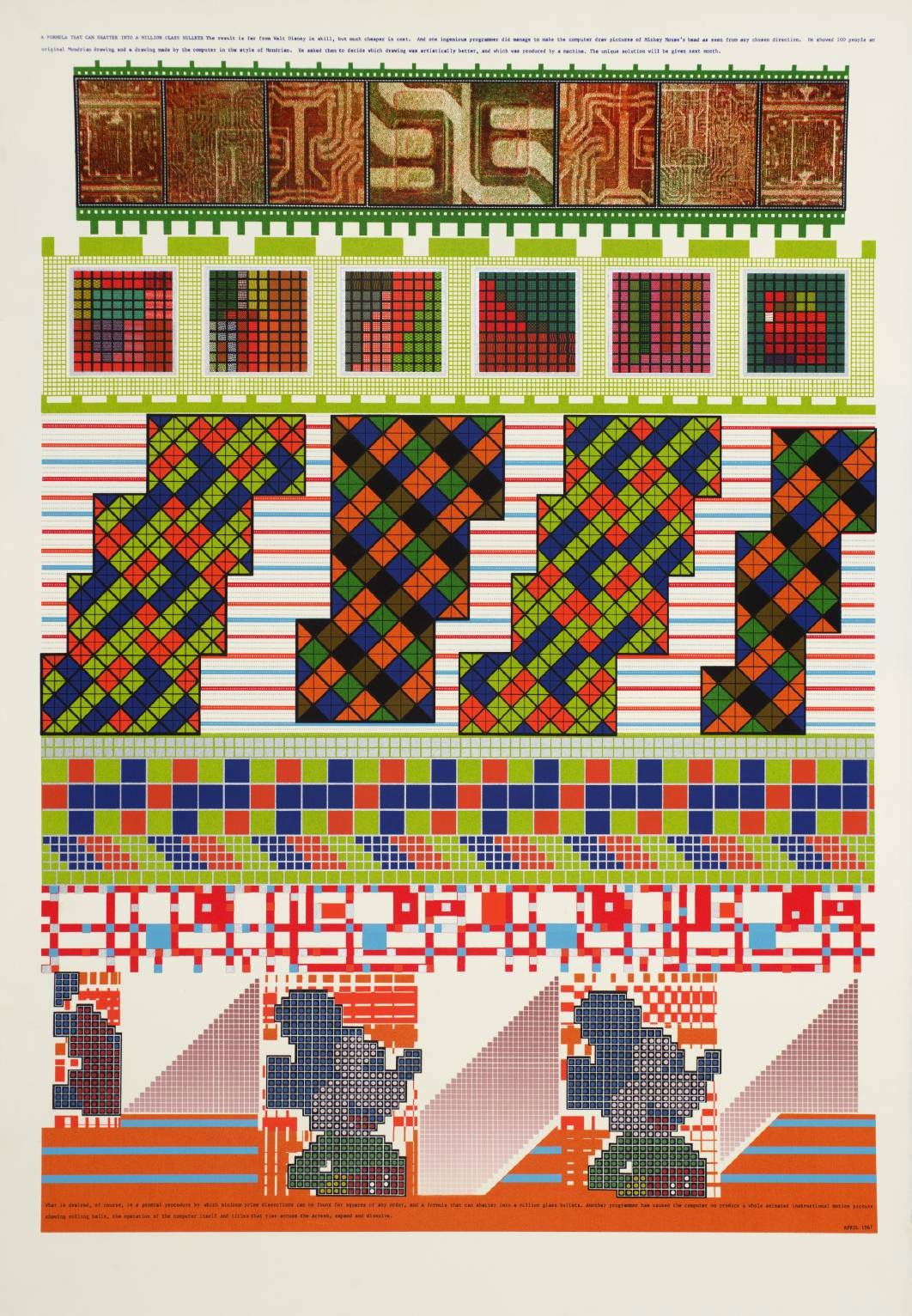 
that portfolio also included continuous pattern images such as Memory Matrix, (below), similar to those seen in Moonstrips. 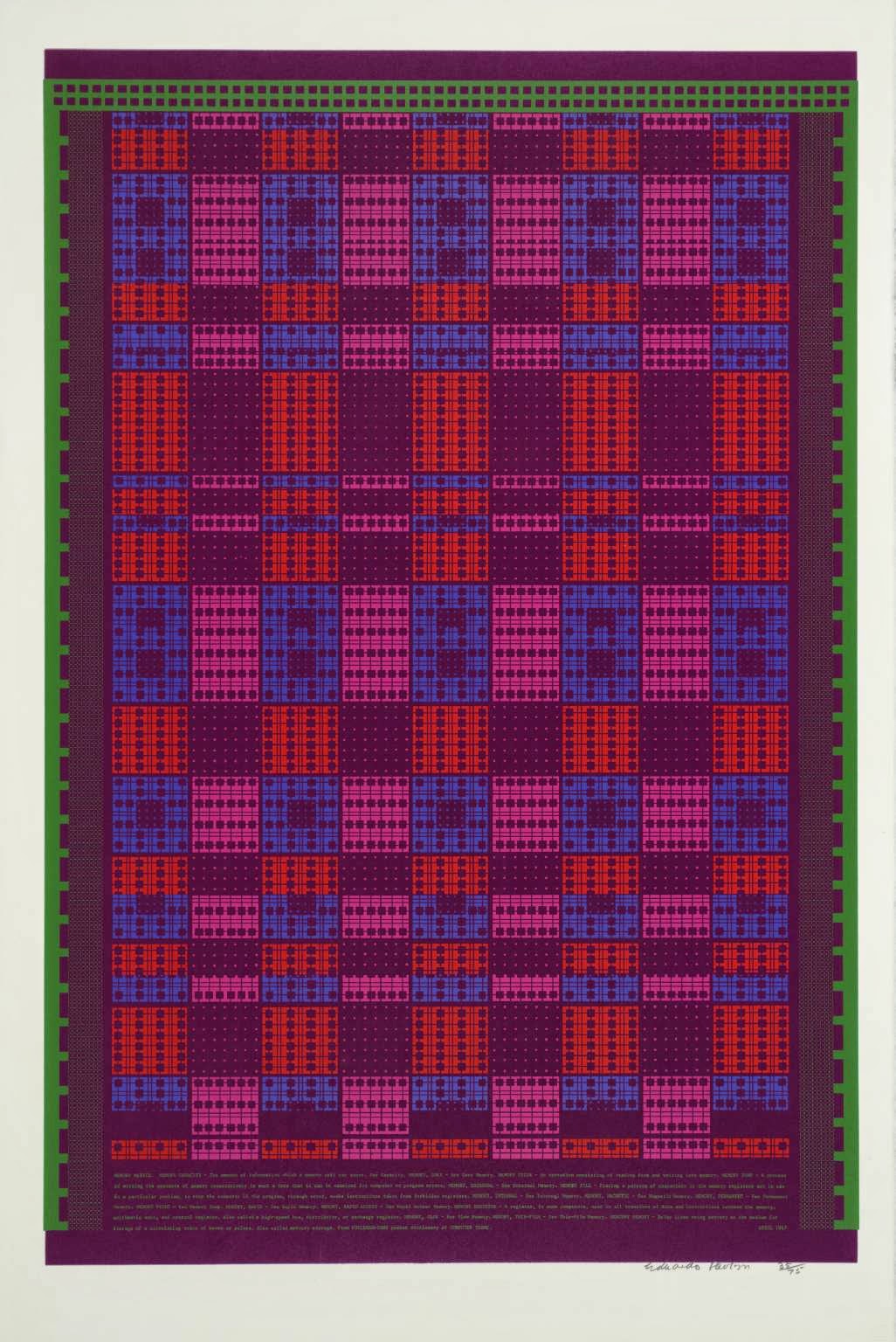 Paolozzi collected patterns as raw materials for his collages – as he did all sorts of images/objects – from a vast range of sources:  food boxes, sweet wrappers, crochet patterns, engineering drawings, etc.  It is pleasing to see that these often mundane visual devices live on beyond their original context in some of the very best artworks of the mid-Twentieth Century.
Posted by davy26 at 04:31 No comments:

Monkeys and apes figured across the years in Paolozzi’s ‘image vocabulary’, for example: a chimp in The Dynamics of Biology, (Bunk!), 1952; another in uniform in Gina Lollobrigida, (General Dynamic F.U.N.), 1970; a pair in Pop Art Redefined, 1971.


Among the unsigned picture prints of Moonstrips one of the most striking is ea 782 King Kong King Kongking Kong: 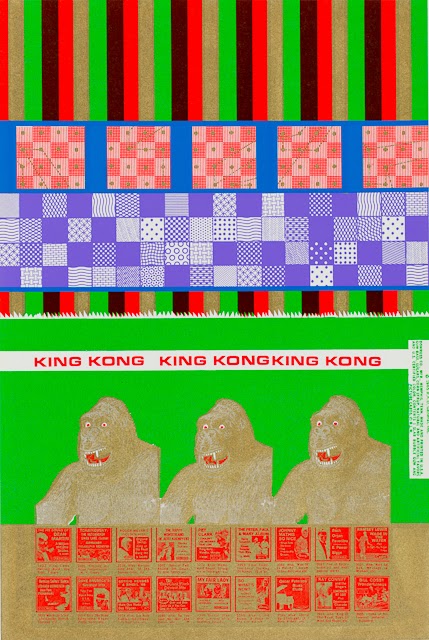 Here is Paolozzi’s expertise in deriving and combining patterns deployed to great effect.  As for this specific ape, I can’t help but wonder if there’s an echo here of ‘Tortured Life’ from As Is When – the poor old misunderstood creature; persecuted and apparently unpleasant, but, as Hollywood showed us, also capable of the most tender feelings!


That tenderness is perhaps evident in ea 763 The Windmills, he murmured, . . . 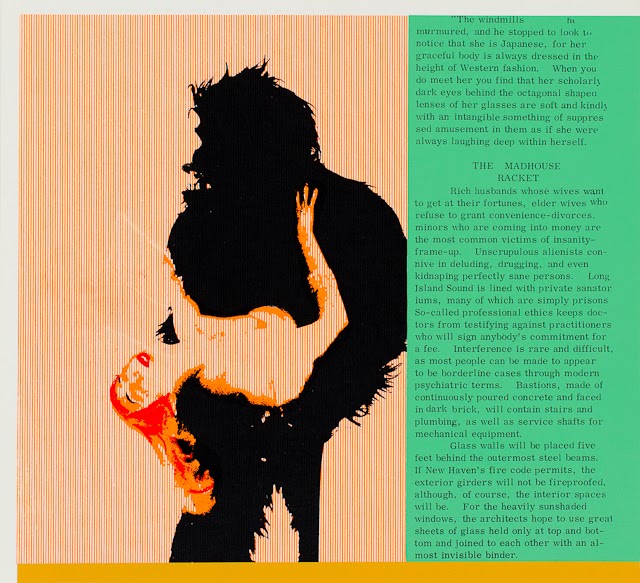 Paolozzi had first used this image in an early Bunk! Collage.  Here it is below as featured in the facsimile series printed in 1972 and published by Snail Chemicals: 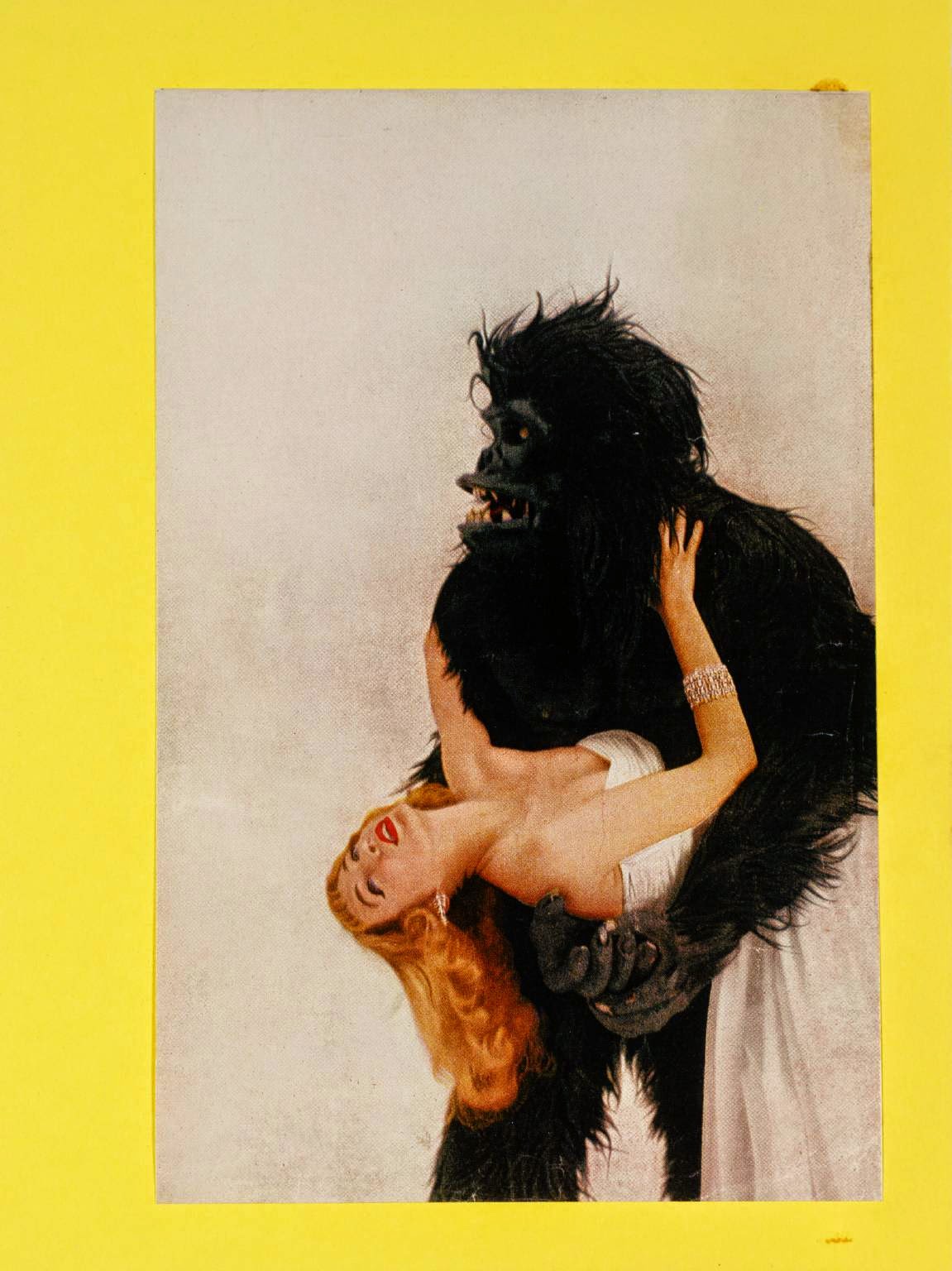 And, it’s the words that indicate an unseen, but possibly lurking ape in ea 750 My Pal the Gorilla Gargantua: 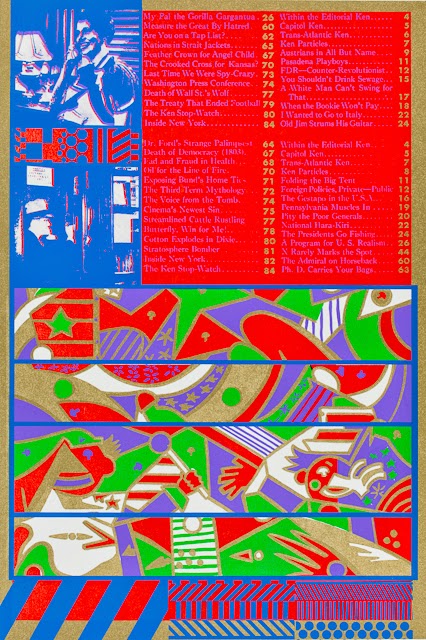 How’s that for colour vibrancy!
For more on 60s prints, please have a look at http://davidbuckden.wordpress.com/
Posted by davy26 at 03:20 No comments:

The Elephant in the modernised room and some secrets

Formica was a key material for DIY dads, (mine especially), in the Fifties and Sixties; whapped over old table tops, shelves etc., its groovy patterns helped turned Edwardian homes like ours into spaces fit to watch Juke Box Jury in on a Saturday evening.  Invented as far back as 1912, it was a laminate made from kraft paper with a melamine top surface.  Formica-Formikel is the seventh signed print: 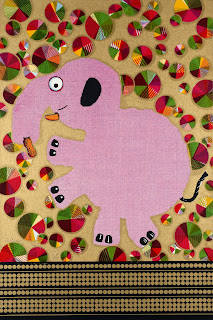 Final signed print is Secrets of the Internal Combustion Engine.  Paolozzi was fascinated by engineering and loved related imagery.  Back in the Fifties/Sixties understanding of technology was limited outside specialist communities.  When cutaway drawings of cars and aeroplanes began to appear more frequently in comics/general interest magazines, it really was like letting light in on magic. 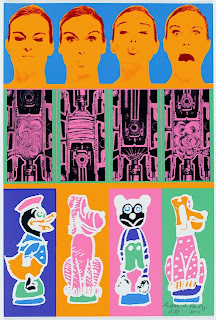