The Portfolio and Conclusion

Just to round things off, here is the portfolio box in which the Z.E.E.P. prints were presented: 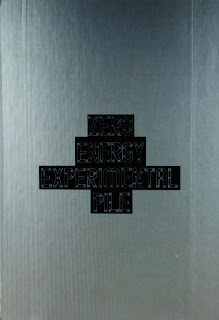 So that’s it.  In this blog I’ve covered all Paolozzi’s significant print media work of the Sixties.  I believe this has provided a view of a truly great artist at the peak of his powers – innovating, experimenting, challenging his own creative processes and the technical limits of the media.


Paolozzi continued to create prints through the succeeding decades, but, to my mind never again with the success he achieved with his Sixties oeuvre.  Fifty years on I believe the work is as fresh and relevant as ever.
Posted by davy26 at 09:02 No comments:

Last of the six prints in the Z.E.E.P. suite is Human Fate and World Power: 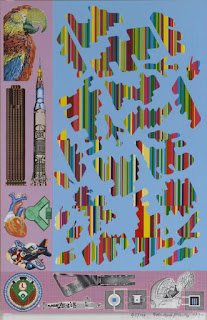 I find this one very forward-looking.  As the twentieth century drew to its conclusion, society radically – and quickly - changed, became fragmentary, as mass communications media and easily facilitated transportation eroded mono-cultural societies.


And notice that in the blue background field two of the things – the car and the aeroplane - that have hastened the fragmentation of human experience are themselves rendered as fragments.


Symbolising the ‘old’ model of the world, the Fitch vault key looks a bit pathetic – will such simple technology continue to enable the safekeeping/security of people, ideas, culture, information in the new world?  Clearly not.  Indeed by the twenty first century we will have laws forcing authorities to release information that previously was so closely guarded.


A parrot can speak and imitate human vocalisation, but – like a computer – not know why it’s doing it - discuss.


More of the day, rockets, submarines and fighter planes, (even comical ones), were reasonable images to portray the currency required for world power – how different today in the context of asymmetrical combat and the notion of ‘war on terror’.


The Sixties and the Seventies were decades when human fate did seem to rest on the machinations of a ‘cold war’ between two world superpowers – the U.S. and the U.S.S.R.  Looking back they now appeal, ironically, as settled times – it was basically a stalemate and a related conflict, which would indeed decide the fate of the human race, was always unlikely.  How different today.