The Silken World of Michelangelo

This is the second of the signed prints, EA#481. 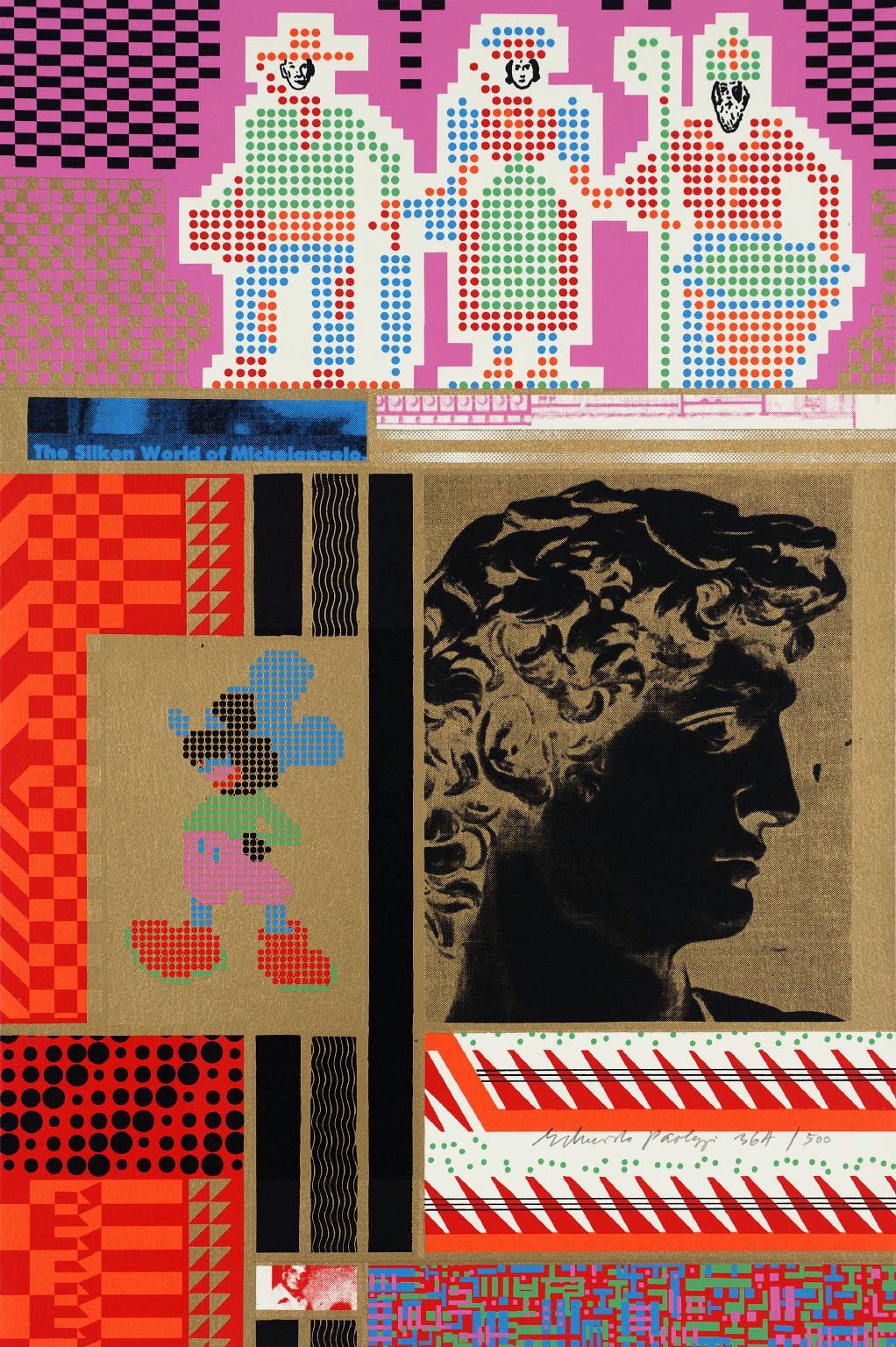 Paolozzi’s assiduous collecting of images and objects from very diverse sources and their use as components in collages was a central theme of his artistic practice.  In the mid-Sixties this approach was very much of the time.  In music, for example, the same approach was evident in the work of The Beatles.  In his magnificent book, Revolution in the Head, Ian Macdonald wrote:
The Beatles liked to surround themselves with a continuous low-level media babble of loosely scattered newspapers and magazines and permanently murmuring radios and tvs.  Apart from the fact that it amused them to live like this – relishing the coincidences and clashes of high and low style that it entailed – they valued simultaneity for its random cross-references which suggested ideas that might otherwise not have occurred to them.


What really matters of course is not the process of creativity but its outputs.  The superb quality of such as Day in the Life or The Silken World is enduring.


The juxtaposition of the head of Michelangelo’s David – one of the very best known icons of high art – with a picture to the left of Mickey Mouse and the three curiously clumsily rendered figures above, is an illogical, dissonant concept, yet brings about a visually harmonious image.  The surrounding patterns and their saturated colours complement the figurative elements, creating a level of eye-candy indulgence appropriate for the cultural world’s sculpted superstar.
Posted by davy26 at 04:03 No comments:

This is the first of the signed prints, #480 in the total Editions Alecto catalogue. 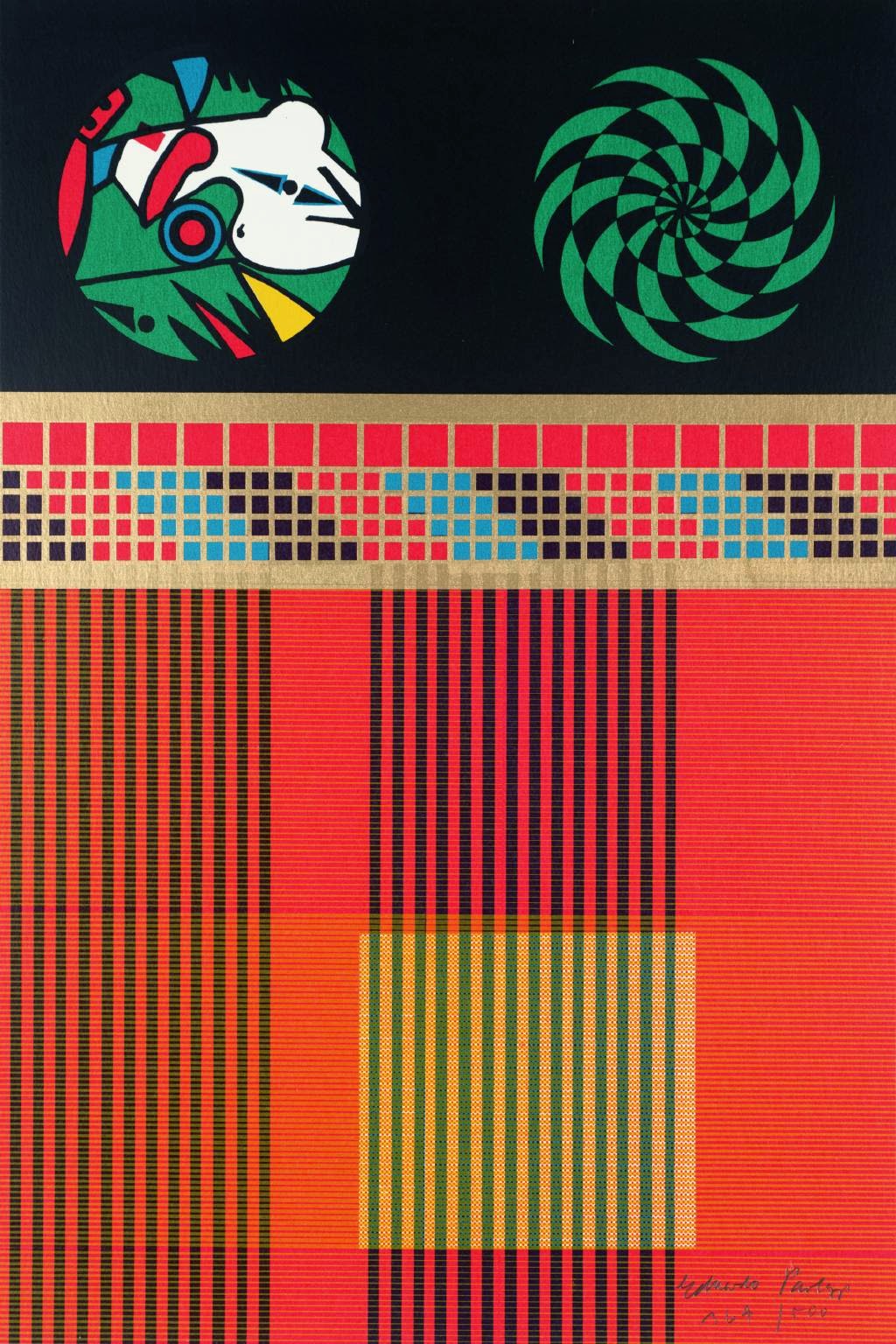 I imagine that this composition was prompted by the general look of mainframe cabinets in the Sixties- as in this ’64 Univac set-up: 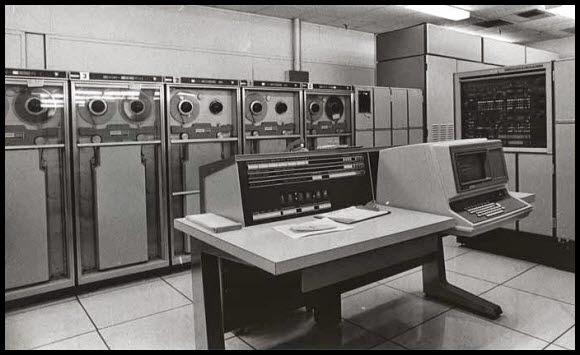 
Paolozzi’s skill is readily evident in the way in which the two upper circles – tape reels? – have the look/feel of rotating objects.  I take the collection of shapes in the left hand circle to be analogous to a variety of stored data objects.


The lower, rectilinear sections of the print also embody an uncanny kinetic effect with the suggestion of multiple, winking mini-lamps and larger panels of light coming and going, as information is processed.


Paolozzi’s fascination with computer technology is apparent here as it was in Universal Electronic Vacuum.  Although it’s often said that Paolozzi became less enamoured of the US and its culture of the mid-Sixties, he encountered inspirational technologies there which were not yet prevalent in England.
However, whether or not this a relatively straightforward representational image as I’ve suggested, it is a beautifully composed picture with a most sumptuous, colour scheme.
Posted by davy26 at 04:57 No comments:


This is something that puzzled me for decades.  Recently, as I learned more about Wittgenstein and his ideas, I became confident that the title referred to an aspect of the Philosopher’s thinking regarding identity.  I thought I’d moved a step on to confirming this when I found the following in the Philosophical Investigations, Part II, ii:  The words ‘the rose is red’ are meaningless if the word ‘is’ has the meaning ‘is identical with’. – Does this mean: if you say this sentence and mean the ‘is’ as the sign of identity, the sense disintegrates?


My search for further confirmation of this theory was suddenly interrupted in an appropriately Wittgensteinian manner, echoing the ‘throw away the ladder’ dictum.  One of the Editions Alecto team kindly phoned me after I’d made contact to clarify a couple of points about the original publication of the Suite.  He told me that Paolozzi had chosen the title, 'As and When': The EA man suggested 'As Is When' as being more intriguing/distinctive.
It’s tempting to think that Paolozzi’s original title, 'As and When' utilised that phrase as an idiomatic indication of a free-flow, unstructured, ad hoc situation – the context in which the later Wittgenstein would have contemplated matters; (rather than within a pre-defined process of logic).  However, I’m sure that EA’s suggestion provided just the right further enigmatic  layer to the Suite’s inherently arcane nature.

Here is Paolozzi in the Shad Thames area with a companion who is surely not hugely unlike a certain Austrian philosopher: 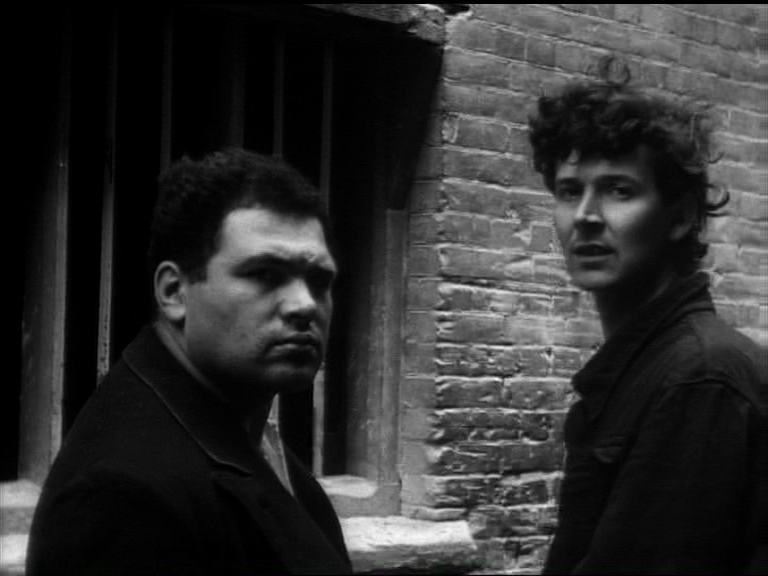 This is a still from a film called Together, made by Lorenze Mazzetti - for more details see Jez Winship's blog: http://sparksinelectricaljelly.blogspot.co.uk/2010/07/lorenza-mazzettis-together.html﻿

Portfolio box and an interpretation summary 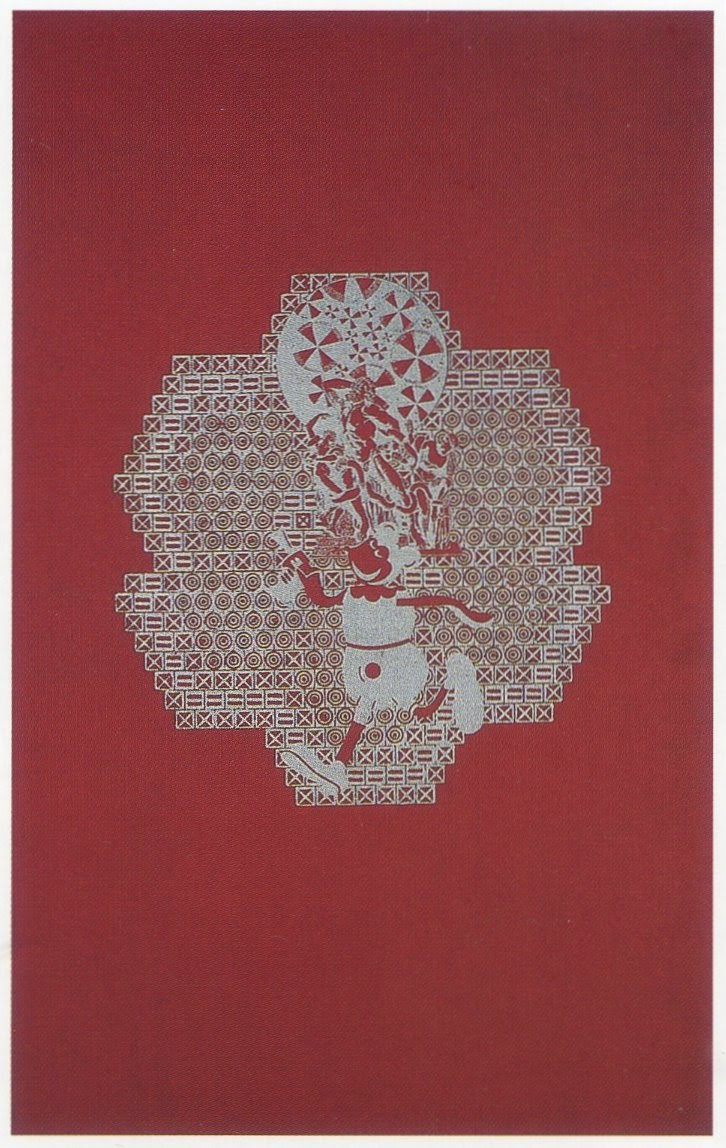 Within her catalogue for the 1977 V&A exhibition, ‘The Complete Prints of Eduardo Paolozzi: Prints, Drawing, Collages 1944-77’ Rosemary Miles wrote:


In the philosophy itself Paolozzi discovered ideas which directly related to the visual arts.  In the Tractatus, his only philosophical book published in his lifetime, Wittgenstein dealt with the nature of language.  One of its central doctrines is the ‘Picture’ theory of meaning.  He discussed the spatial (in writing) and temporal (in speech) relationships between words and how they literally alter the sense, or pictorial image, of propositions (the difference between ‘My knife is to the left of my fork’ and ‘My fork is to left of my knife’ can be demonstrated pictorially).  He claimed that if some sentences did not at first look like pictures this was because language disguised them beyond all recognition.  A proposition is often composed of a more complex set of propositions which can be broken down or ‘atomised’.


Paolozzi arranges and rearranges ‘Propositions’ which in turn often seem to be ‘atomised’ into more abstract patterns, symbolizing a greater complexity and abstraction of thought.  It is evident from Wittgenstein’s writing that a picture, to him, was not only the ‘painting, drawing or photograph . . . but also maps, sculptures, models and even such things as musical scores and gramophone records’.  Paolozzi’s use of such materials as crochet patterns, engineering diagrams and wrapping paper in the collages seems to reiterate this.


Although Wittgenstein was not able to say exactly what constituted a ‘thought’, he could say that it is related to its expression in ordinary language by extremely complicated rules which we operate from moment to moment without knowing what they are.  In Philosophical Investigations Wittgenstein proposes that that in language we play games with words.  To understand the meaning of a word we must study it through the rules of the game to which it belongs.  Fascinated by toys and games himself, Paolozzi applied this theory to the use of ‘pictorial’ language, analysing and reorganising the juxtaposition or ‘syntax’ of the ‘vocabulary’ or pictorial elements and by doing so he attended to the nuances of pictorial composition in the same way that Wittgenstein attended to the nuances of speech.  As the ‘syntax’ varies or different rules of the ‘game’ are applied so the total image changes.
Posted by davy26 at 04:30 No comments:

Back to New York

Back to New York
As I’m preparing to move on to Paolozzi’s next print series after Universal Electronic Vacuum, Moonstrips Empire News, I’m taking stock again of Marcel Duchamp’s works and influence.  The concept of presenting a ‘viewer’ with material in a non-prescribed format or sequence is a major feature of Duchamp’s Green Box which complements his ‘Large Glass’.  Moonstrips certainly follows Duchamp’s lead, though it has a much larger frame of reference.
Duchamp’s influence is also signalled in Wittgenstein in New York – by the circle/spiral forms which refer to Duchamp’s 1920 Rotary Glass Plates, kinetic works which he developed whilst, like Wittgenstein, temporarily in New York.
The image also features a rotary aircraft engine, referencing Wittgenstein’s involvement with aeronautic engineering whilst at Manchester University, initially with kites, then an unconventional heat engine and finally with an innovative design for a propeller. 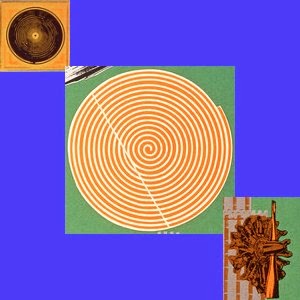 The initial (190 copies) limited edition version was not varied in colour rendition: 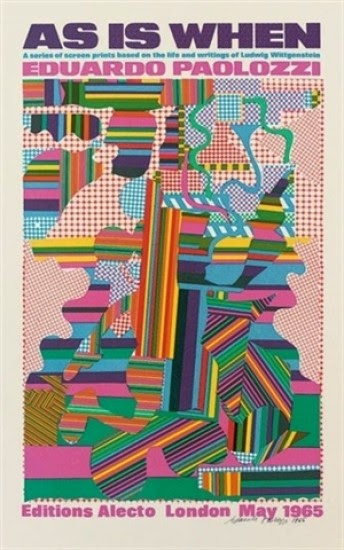 A slightly smaller version of this was printed in an edition of 140 for an exhibition at Editions Alecto’s Holland Street, Kensington ‘Print Centre’.  The text on this is reduced to: Eduardo Paolozzi; Editions Alecto London May 1965.


The image used on the Suite’s box was also reproduced as a black & white poster: 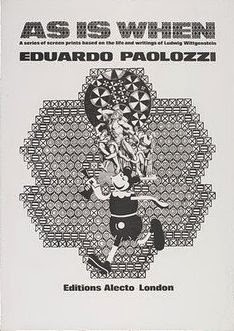 Here is a 1966 US version, based on Tortured Life: 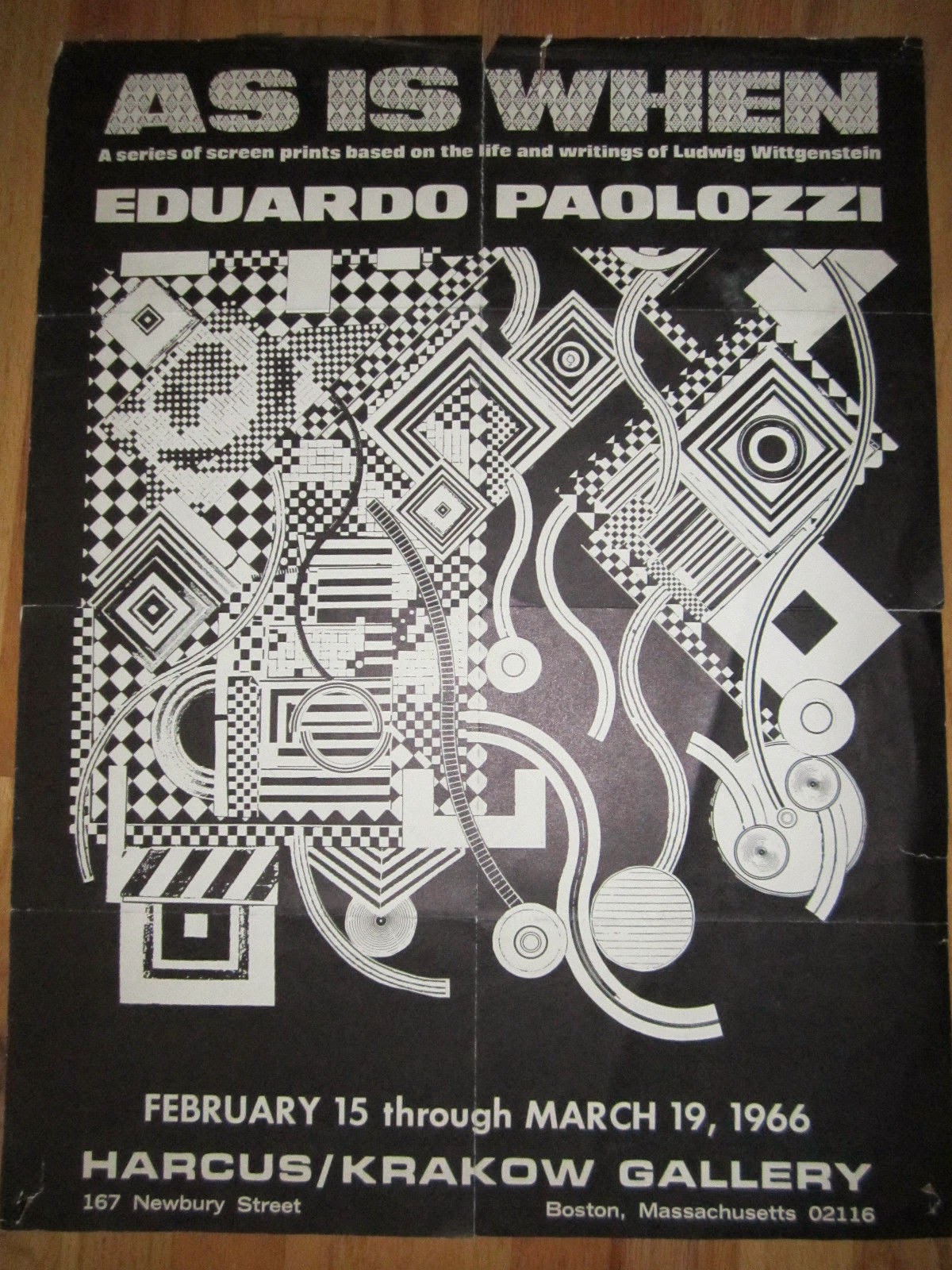