As Is When, Moonstrips Empire News and General Dynamic F.U.N. had all been published by Editions Alecto.  Alecto’s co-founder, Paul Cornwall-Jones left to set up Petersburg Press in 1968 and ZEEP was one its first great issues.  Paolozzi, however, returned to Alecto for the publication of the subsequent print series, The Conditional Probability Machine (1970) and Cloud Atomic Laboratory 1971.
Petersburg Press published some of the very best print media contemporary art of the late Sixties/early Seventies, notably by:


Next Z.E.E.P. print is Will the Future Ruler of the Earth come from the Ranks of the Insects: 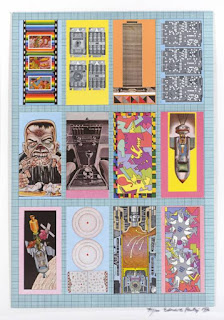 Four of the panels from this print featured in the very successful cover design for Diane Kirkpatrick's 1970 book,  Eduardo Paolozzi.
Posted by davy26 at 05:03 No comments:

The Pile itself and an explanation

Here, below, is a 1950 cutaway drawing of the Zero-Energy Experimental Pile (ZEEP), which on September 5, 1945, became the first nuclear reactor to initiate a self-sustaining chain reaction outside the United States, at Chalk River, Ontario, Canada: 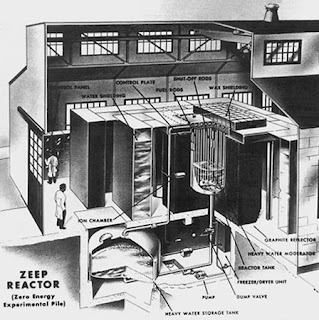 Originally part of an effort to produce plutonium for nuclear weapons, the reactor was designed by a team of Canadian, British and French scientists and engineers assembled in Montreal and in Ottawa in 1942-43 under the administration of the National Research Council. Named Zero Energy Experimental Pile because it was developed to produce only one watt of heat, the ZEEP reactor was used to provide data for the design of the powerful NRX (National Research Experimental) reactor. 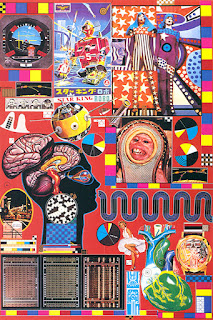 The Museum was opened in 1965 and thrives to this day – spawning 3 other such museums subsequently opened in Branson, Missouri, Pigeon Forge, Tennessee and Myrtle Beach, South Carolina.  Clearly, despite all today’s electronic media coverage, the public remains keen on viewing effigies of ‘celebrities’.  Paolozzi certainly enjoyed visiting the place when he was teaching at Berkeley.  The print is rich with several of his fave images – spaceflight hardware, robots, monkey, technology/medical cutaway drawing and a pin-up.  I imagine that on a walk around the Museum you would have the impression of a similar jumble of characters and dioramas.
Posted by davy26 at 08:28 No comments:

This is the last of Paolozzi’s great 60s print suites, created whilst he was a visiting professor at the University of California, Berkeley.  Steeped in the contemporary American West Coast culture, the imagery is especially rich, complex and charismatic.  The title is derived from an atomic physics book – a typical piece of Paolozzi image/language magpie-ing.


Throughout the suite there is an underlying tension between the super-serious themes of the Cold War/The Space Race/Globalisation and the banality of popular consumer products/images/media outputs.  Pure pattern takes a bit more of a back seat, but is still used selectively to great effect.  Where written language had become progressively more central to Paolozzi's work in the preceding suites, Z.E.E.P. is a celebration of hectically assembled, maximum-impact visual imagery.


As the 60s came to a close Paolozzi was seeking to maximise his use of the more photo-friendly lithography process.  However, creative demands intervened and in a letter dated 2nd February 1970 Paolozzi told Diane Kirkpatrick:
The new set of prints is called Zero Energy Experimental Pile is (sic) half-way through proofing, once again the original intention was to use photolitho exclusively but screen printing is beginning to appear.


First print glories in the title: Plus Cry on my Shoulder, No Sad Songs etc: 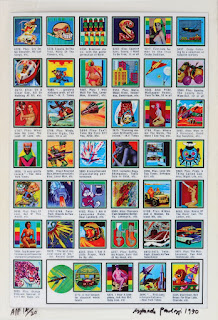