Two ziggurats in the top section.  The ziggurat temple format, with its ‘stepped’ profile, originated in the Middle East around 200–500 AD. Following a long wait, they suddenly became very trendy again in the Sixties!  Major exponent was Joe Tilson with a series of Ziggurat images during the course of the decade, e.g. Ziggurat 5, screenprint 1966: 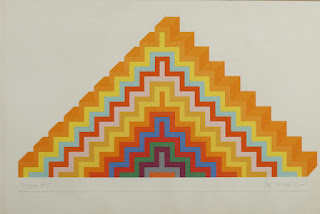 Heart beating, watch ticking, cylinders firing.  In 1969 it was becoming possible to anticipate the reality of a blurring of lines between organic and mechanical/electronic functionalities.


In the new world of funky science, will a leopard be able to change his spots?


Yes, Man is in space, but, happily, children still like to play very simply.


The delightfully garish version of Pacific Standard Time shown below is an Artist’s Proof: 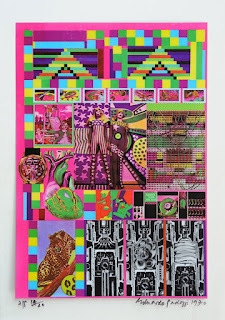 Here I am, the number one Paolozzi maniac in East Kent, and only by chance this morning did I discover the Home and Away exhibition at the Beaney in Canterbury.  I’m not sure how I missed being aware of this show – it’s been running since May 9th and features a fantastic array of the General Dynamic F.U.N. prints.  It’s especially good to see the prints at first hand again and their manner of display – they’re not formally framed and have the ‘look’ of something still being proofed.  From the ‘context’ exhibits I was also surprised by the fact that I’d forgotten about the original J G Ballard introduction to the Suite:


The marriage of reason and fantasy which has dominated the 20th century has given birth to an even more ambiguous world.  Across the communications landscape move the spectres of sinister technologies and the dreams that money can buy. Thermo-nuclear weapons systems and soft-drink commercials coexist in an overlit realm ruled by advertising and pseudo-events, science and pornography. In ‘Moonstrips Empire News’ Eduardo Paolozzi brilliantly explored the darker side of this mysterious continent. By contrast, in ‘General Dynamic F.U.N.’ he brings together the happiest fruits of a benevolent technology. The leitmotif is the California girl sunbathing on her car roof. The mood is idyllic, at times even domestic. Tactile values are emphasised, the surface pleasures to be found in confectionary, beauty parlours and haute couture fabrics. Children play in a garden pool, a circus elephant crushes a baby Fiat. Varieties of coleslaw are offered to our palates, far more exciting than the bared flesh of the muscle men and striptease queens. Mickey Mouse, elder statesman of Paolozzi’s imagination, presides over this taming of the machine. The only factories shown here are manufacturing dolls. Customised motorcycles and automobile radiator grills show an amiable technology on its vacation day. Despite this pleasant carnival air, a tour de force of charm and good humour, Paolozzi’s role in providing our most important visual abstracting service should not be overlooked. Here the familiar materials of our everyday lives, the jostling iconographies of mass advertising and consumer goods, are manipulated to reveal their true identities. For those who can read its pages, ‘General Dynamic F.U.N.’ is a unique guidebook to the electric garden of our mind.


If you’re in the South East, and – as I was up to today – unaware that such an image-feast is on offer, get a move on – the show closes on 23rd August.  http://www.canterbury.co.uk/Beaney/whats_on/Home-And-Away.aspx
Posted by davy26 at 06:23 No comments:

The next print is Agile Coin Gross Decision Logic.


This image has a clear antecedent in an earlier series.  From 'Universal Electronic Vacuum', War Games Revised, is conceptually similar, as is the format and some of the componentry.  However, where War Games . . . is cool and sombre, Agile Coin . . . is busy and brash.


All this weaponry repeatedly and banally depicted as goodies in a sales catalogue, yet capable of immense destruction and misery.  The simple, crude repetition of deadly imagery was a frequently visited theme in the Sixties.  Warhol in particular was fascinated by the idea that seeing something over and over again is desensitizing, eventually allowing horrific images to be viewed with indifference.  His Death and Disaster series from early in the decade thoroughly explored this concept.


AGILE-COIN was a computer war game developed in the late Sixties.  It was an attempt to integrate a variety of types of conflict (rather than just a conventional battlefield scenario) to inform the development of new tactics relevant to the asymmetrical sort of warfare encountered by US forces in Vietnam.


Here is the print in two colourway versions, (the left hand version is an artist’s proof): 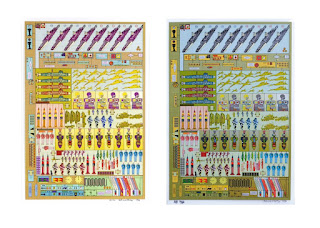