50 Years on and back in Albemarle Street

I have been a fan of Paul Smith’s sumptuous ties and socks for years.  Long ago I had a wonderful pair of stripy socks, looking rather akin to a 425 line tv screen suffering from, (maybe alien-transmitted from deep space), interference, which I referred to as my Eduardos.  So I was especially pleased to find this collaboration between the Designer and Emma Paolozzi: 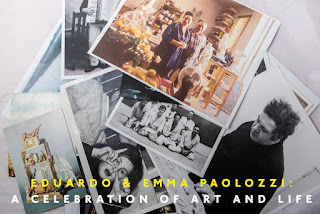 The details of this can be seen at: http://www.paulsmith.co.uk/uk-en/shop/stories/eduardo-and-emma-paolozzi-at-9-albemarle-street

I’m only sorry that I was unable to get to London for this event last October.  It was at 9 Albemarle Street – I would have enjoyed the added nostalgia factor that this street was the location of the Editions Alecto gallery which I frequently visited in the Sixties.
Posted by davy26 at 05:43 No comments:

The Subject is S.I.N.

I have always much preferred Paolozzi’s graphic work to the sculpture.  It is true, however, that it is the latter that has received the most general acclaim.  And some of the oeuvre – the Tottenham Court Road mosaics, ‘Four Towers’ and ‘Hamlet in a Japanese Manner’ for example – straddles the media. 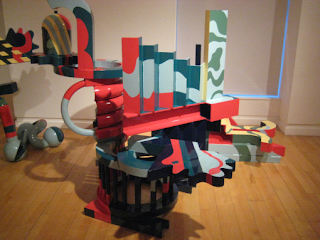 (Part of) Hamlet in a Japanese Manner      Courtesy GoMA


Of the sculpture, some of the Sixties works appeal to me as they relate directly to – and have the same ‘look’ as - the great prints, such as, ‘Wittgenstein at Casino’.


Later in his career, Paolozzi became very interested in Sir Isaac Newton and William Blake’s monotype of him.  In the various versions Paolozzi succeeded in expressing the reality of human thinking, whereby apparently contradictory notions can – indeed, HAVE – to be accommodated.  Blake, from a traditional religious viewpoint disapproved of the Newtonian quest to scientifically account for the world, (in the Wittgenstein sense), and rendered him as myopic, whereas Paolozzi’s Isaac, in the version at the British Library in London, has Michelangelo’s David’s all seeing eyes.


But I remain convinced that Eduardo should have stuck to printmaking – just look, below, at what happened when he was in the role of the sculptor - a suit (!) and . . . ! 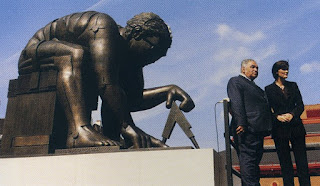 Courtesy Frank Thurston
Posted by davy26 at 06:14 No comments: