A rarely-seen lithograph recently crossed my path.  It’s from 1963 and, as far as I know, is untitled: 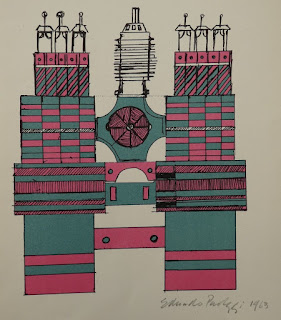 The image featured in The Metallization of a Dream.  This book, created by John Munday, gathered together a selection of Paolozzi’s fifties/early sixties work.  A commentary text was contributed by Lawrence Alloway.  It was published by the Royal College of Art’s ‘Lion & Unicorn Press’ in an edition of 400.

Both graphic and sculptural work is included, with an emphasis on technological source imagery and components, often of automotive industry origin.

Although a pleasingly ‘flat’ image, the print could well be an intermediary study for a sculpture piece typical of Paolozzi’s output in the first few years of the sixties decade.  For comparison, here, below, are some example three-dimensional ‘cousins’: 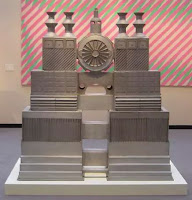 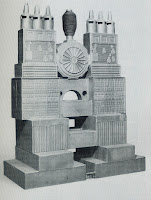