The schism that separates Space Age Engineering, technical photography, film making and types of street art from fine art activities is for many people/artists unbridgeable.  Within the grand system of paradoxes, the theme of this portfolio is the Human Predicament.  Content enlarged by precision.  History shaded into the grey scale as in the television tube. 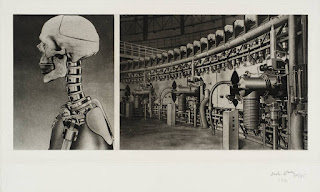 
Ever since I first set eyes on one of his prints in 1965, (would have been one of the As Is When series), as well as revelling in their sheer visual splendour, I have wanted to understand the meaning of Paolozzi’s imagery and texts.  This I have tried to analyse and explain throughout my writing on this blog.  During the course of the Sixties the complexity of Paolozzi’s thinking and expression progressed, peaking with Z.E.E.P.

Then we come to Cloud Atomic Laboratory.  This is a series of eight etchings in an edition of 75.  It was commissioned by British Olivetti and was printed at Alecto Studios in 1971.  To my eye these are the least attractive images I have seen from Paolozzi.  I’m missing the usual multiple juxtapositions, the incorporation of pattern and the sheer pleasure of rich colouration.

Paolozzi suggested that these photographic images were a top skim of the huge number he had been collecting since 1952.  Importantly, there was no modification of them beyond the rendering in a uniform, very bland photogravure-style printing.  That the printing method was etching was the only cue – apart from knowledge of who was presenting them – to their being ‘artworks’.  So really we are here concerned with the same Dada notion whereby Duchamp’s urinal became a piece of sculpture simply because it was installed in an art gallery.  An important milestone in art ‘history’, but not really worth repeating some 54 years later.

I was prompted to write this post by the recent receipt of mailshot from GoldMark – this excellent gallery/on-line seller was offering a set of Cloud Atomic Laboratory prints at £1,200 each.

So what have we got?  It’s another cracking series title, hinting at sexy stuff like innovative, leading edge technology and space travel.  (On the downside, I do sometimes muddle this series up with the previous year’s Conditional Probability Machine.)  It is also a further example of Paolozzi’s willingness to keep trying new approaches/media, despite having found great facility and success with screenprinting and lithography.

Otherwise, we have a set of images which I find quite depressing.  Some of this is due to their style being very similar to that of illustrations found in the outdated encyclopaedias which were prevalent in the Fifties – the very poor ‘equivalent’ then for an information-hungry kid of today’s Internet.

I’m sorry to say that for me these prints do not achieve the ‘bridging’ function Paolozzi cited in explaining their creation in his Introduction reproduced at the top of this post.