The March of Time

Much as I have tried (!) I have yet to find any of Eduardo’s sculpture or his graphic work post-Seventies, as satisfying and attractive as the Sixties series which are the main feature of this blog.


I feel that Paolozzi himself had a similar view.  Like most significant artists, he constantly sought to develop his artistic practice and find new forms of expression/technique.  But, I believe his thinking naturally strayed back to the heady days of As Is When, UEV, etc, from time to time, and this guided his eye and hand.  As examples, look at these two prints: 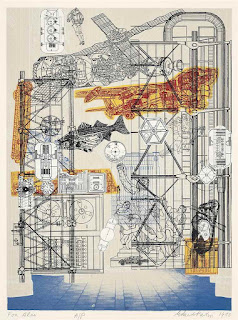 
The imagery and subject matter are familiar from the Sixties work.  However, the representational images here do not function quite so well in juxtaposition as in the older work without the abstract pattern use, which somehow both unified the overall image and also defined sub-fields.  But, as so often in the Fifties and Sixties, I sense that Eduardo’s Science Fiction head was well and truly on and connected.  And yet some of the objects which would have been fantasies for the future not so long before, had become by 1980, relics to display as if ancient, in a museum.


From 1998, nearing the end of his life, comes this lithograph, very much in the style of the early Sixties prints and sculpture: 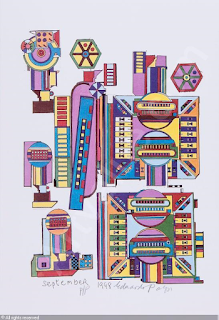 
Colour use and form are to me classic Paolozzi, and all the better for that!
Posted by davy26 at 07:39 No comments: