Abba-Zaba is an ‘artist’s book’ created by Eduardo Paolozzi whilst he was a guest lecturer at Watford School of Art in 1970.  The content continues themes from Moonstrips and General Dynamic F.U.N. 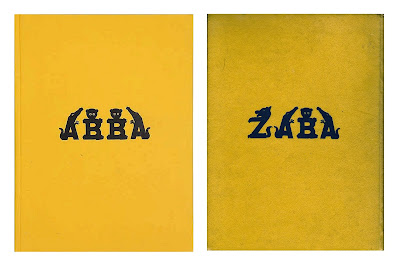 The production method and cost constraints limited the image content to black and white rendition.  Here is a sample page:

At one level of interpretation, given the title, Paolozzi, tongue in cheek, was perhaps presenting a compendium of texts and imagery which represented a neatly distilled A-Z of the World, (all in the course just 70 pages.)  In 1970 we were not yet nearing the brink of the new world of information technology but I believe Paolozzi had considerable foresight of this.  With this he envisaged the completely revised cultural situation in which we now live: a milieu abounding with information, images, concepts, speculation, news, junk news, soap opera, advertising, marketing, video, audio, virtual reality, noise, music, jingles, and dissonance.  This is a 24/7 world in which it is increasingly more difficult to be all-knowing/expert as there is just such a huge volume of data to be assimilated.  And it is certainly impossible to ‘sum up’ fields of information neatly in the sort of reference works/encyclopaedias we were still turning to in 1970.  With the inter-connectivity of information sources as well as the sheer volume of the stuff, any single - or body of - representation of knowledge is likely to be obsolete before you can re-transmit or print it.


But what is Abba-Zaba?  It’s a brand of Californian confectionery manufacturer, Annabelle Candy Company.  The bar itself is chewy – like toffee – with a peanut flavour centre.  I don’t know if Paolozzi liked the taste, but I’m sure he was very attracted by the packaging, especially the chequer patterned wrapper – there is an echo here of the Cox’s gelatine packet design that he used in the As Is When series, see - http://paolozzi.blogspot.co.uk/2014/06/tortured-life.html

Abba-Zaba also enjoys plenty of Paolozzi-friendly mass-media associations – name-checked in tv shows, movies and rock music; with the latter for example, Capt Beefheart’s LP, Safe as Milk was originally slated to be named Abba-Zaba.
The book was published in a limited edition of 500 and nowadays it regularly comes up for sale, recent examples being offered for an average price of £195 – so it’s a very affordable way to own a signed/numbered Paolozzi printed work.